The Roman gold mining district is situated on a wooded plateau called „Karth“ to the southeast of the town of Neunkirchen in Lower Austria between motorways S6 and A1. It lies in the foothills of the Eastern Alps and is bordered to the north by the Vienna Basin (Wiener Becken) and to the east, south and west by valleys (Pittental, Hassbachtal and Tobelbachgraben). The core area, where the mining fields are, covers about 2.5 by 6 km. The whole study area, including the catchment area of the leats covers about 60 km2. 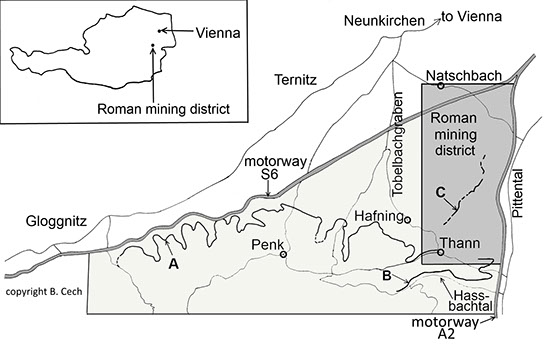 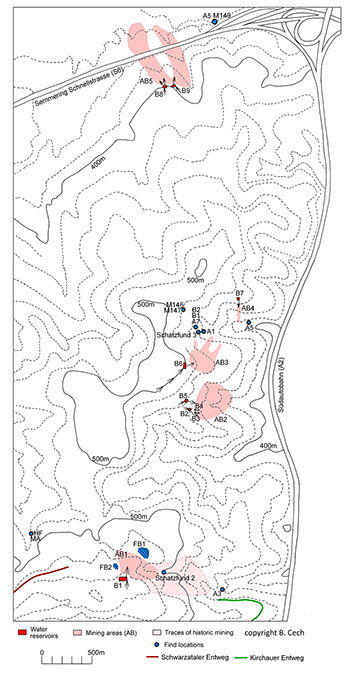 Geologically the „Karth“ is part of the Loipersbacher Rotlehmserie, which is a massive accumulation of scree consisting of layers of reddish to greenish loam interspersed with layers of weathered quartz and quartzite. It is in this formation that the gold is found in the form of placer deposits. 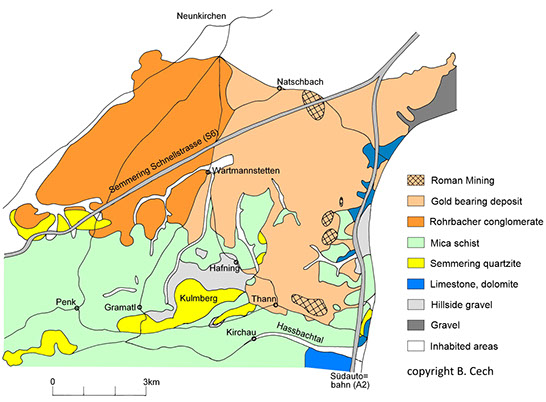 Location map of the Roman mining district and the courses of the leats (A-Schwarzataler leat, B-Kirchauer leat, C-potential leat).

The Roman mining district „Karth“ showing the mining fields (AB) with the reservoirs (B) and accumulations of finds (FB).

Hydraulic mining in the „Karth“

The main archaeological features related to Roman gold mining in the „Karth“ are leats and reservoirs. These distinctive features are remains of hydraulic mining as described by Plinius the Elder in his historia naturalis (33, 74-78), a typical Roman method for mining placer deposits. Water is collected in leats leading to reservoirs above the part of the deposit to be exploited. When the reservoir is full the sluice gates are opened and the torrent of water breaks up the deposit. The resulting debris is carried downhill where larger chunks of waste rock are removed and the fine sediment is then washed to obtain the gold.

Each of the five so far identifed mining fields consists of one or more reservoirs and steep channels leading downhill from the reservoirs into deep, heavily washed-out opencasts with the spoils from mining and washing accumulated as alluvial fans at their lower ends. Smaller reservoirs in the lower sections of the opencasts might have been used for collecting water for the washeries. The reservoirs were dug into the hillside and the spoils from these excavations were used to construct the embankments.

The size and shape of the reservoirs varies greatly according to the local topography. They

are rectangular, triangular or roughly ellipsoid. Their size varies from 35 by 22 m to 80 by 43 m. The surviving height of the embankments suggests that they were quite deep. Each reservoir has one inlet for the leat and one or more outlets leading to the hushed opencasts. (Abb. 4 bis 6) 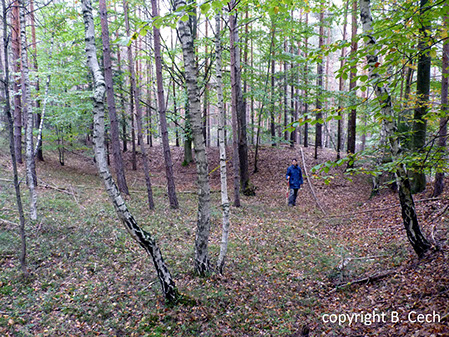 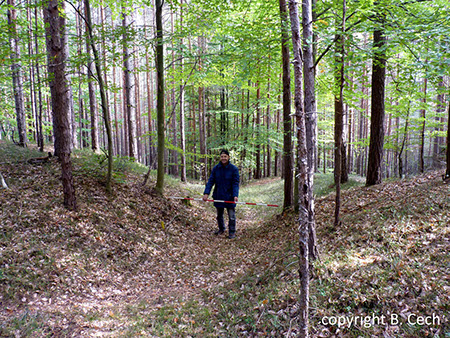 The inside of one of the reservoirs.

The outlet of one of the reservoirs. 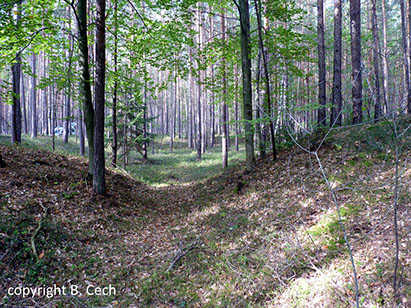 The inlet of one reservoirs.

(Göttschach 2007). It meanders for about 25 km through small valleys formed by seasonal watercourses.  (Abb. 7) 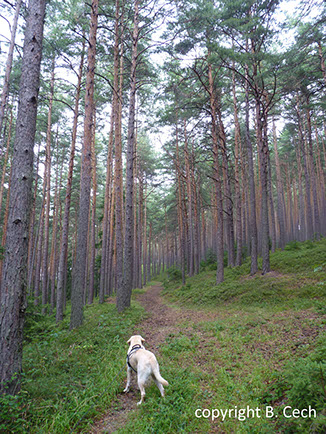 The course of the Schwarzataler leat.